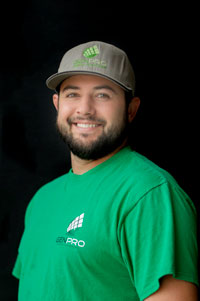 John is originally from Georgia, where he worked in the hospitality/culinary industry for 2 years, at Chateau Elan, before joining the US Air Force in 2004. John served 8 years on active duty and deployed several times to the middle east, before honorably separating in 2012. After the military, John began working at Cabela’s as the Archery department lead for 3 years, where he was able others who enjoy the outdoors maximize their experience in the Black Hills. John began his career at GenPro in 2014 as the warehouse and eventually took over as warehouse and logistics manager, as well as the additional duties of equipment maintenance, safety program manager, and recycling program manager. John enjoys the family atmosphere at GenPro, and finds his job exciting as the spectrum of different renewable energy projects goes worldwide. Towards renewable energy, John and his wife Erika installed solar power on their house in 2016, and he finds the advancement of the energy production industry in just the last hundred years to be amazing – from inventing the lightbulb to harnessing solar, wind, and water to provide clean renewable, reliable power. It makes him fascinated and curious to see what’s next.